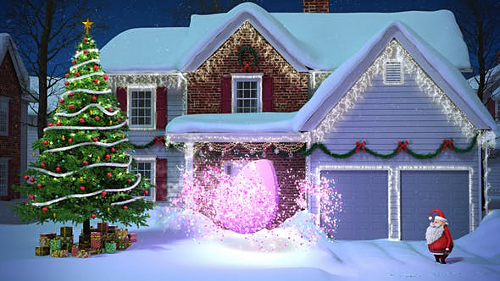 • Compatible with old versions of After Effects (for After Effects CS4 and newer).
• Full HD Resolution – 1920×1080 / 24fps / 60 sec.
• No plug-ins required.
• Fast render time. About 20 minutes on a modern machine.
• There are 11 placeholders where you can add your content. The text in the
beginning, 8 placeholders on the Christmas tree, one placeholder revealed by the
magic (the logo) and the final scene where you can replace everything behind
Santa.
• Easily change the colors of the magic particles, Xmas tree toys, Santa’s cloths
and other elements with custom controls.
• The cards on the Christmas tree can be removed. You can place your content
directly on the tree (replacing each card).
• The logo placeholder has controls for adjusting the depth of the 3D or turning the
3D effect on/off.
• All sound effects are included. The music is not included.
• The font used in the preview is free. There is a download link in the
documentation.
• Video tutorial included.
• PDF Documentation included.